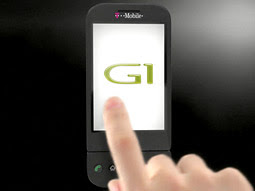 ANDROID is the new smart phone released from Google. It has a touch screen, 3G high-speed network and an application store full of third-party-developed tools, the new “Google phone” has elicited numerous comparisons to Apple’s iPhone. But for Google’s Android mobile-operating system to be successful, it needs its phones to be much more than the first viable iPhone competitor.
The goal with Android is to simplify the mobile market and get wireless subscribers to buy smart phones and use the internet on their phone. The comparison’s have begun check google’s blog at: http://googleblog.blogspot.com/2008/09/first-android-powered-phone.html for more d’s.