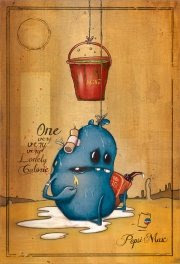 BBDO Dusseldorf depicts a sad semblance to a calorie committing violent suicide in the new PepsiMax print ads. Ads included the character claiming death by gunshot, a hanging, self-immolation and slitting his little blue wrist with a razor blade.

Message boards have been popped up with much anti-Pepsi sentiment. The concern is that these kinds of ads are insensitive to the issue of suicide. General Motors got bogged down in a similar issue, when a Super Bowl ad depicting a robot considering suicide caused an uproar.

GM edited their ad. The author leading this story is interested to see how Pepsi, not exactly known for living on the edge, responds.