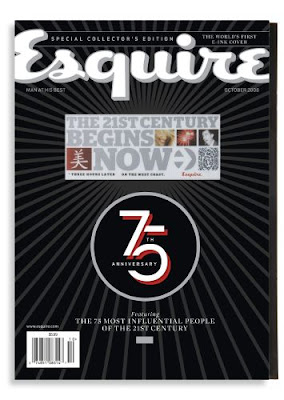 I thought this was a fantastic (and expensive) idea when I heard about it months ago. Hey, the Rolling Stone did a Holographic cover as a gimmick for their big 40th anniversary with success…Apparently, Esquire used lithium battery power (same as a laptop) to light up their 75th birthday cover for the mag. Esquire created a high-tech electronic front cover for its October 2008 issue which. The goal was to distribute 100,000 electronic copies of its 720,000 anniversary print run and, to gain more revenue, sold the reverse side of the cover as ad space to Ford. Reviews were not that rave. Media Agency: MindShare Media Owner: Hearst